The Floating City of The Solution to Global Warming ?

On the eve of a major report on the impact of climate change, a flurry of futuristic designs has been proposed that would see humans permanently living at sea. How realistic are they?

The idea of an apocalyptic flood engulfing the world has long fascinated the human race. Versions of it appear in ancient myths, the Bible and Quran :

Noah was six hundred years old when the floodwaters came on the earth. And Noah and his sons and his wife and his sons’ wives entered the ark to escape the waters of the flood. Pairs of clean and unclean animals, of birds and of all creatures that move along the ground, male and female, came to Noah and entered the ark, as God had commanded Noah.  And after the seven days the floodwaters came on the earth. (Genesis 7 : 6-10)

And he (Noah) said: ‘Embark in it! In Allah’s Name shall be its sailing and its berthing. Verily my Lord is the Forgiving, the Merciful.’ So, it sailed with them amid waves like mountains. And Noah called out to his son and he was aloof: ‘O my son! Embark with us and be not with the unbelievers.’ (Qs. Hud (11) : 41-42)

But back in the real world, a major UN report to be published next week is expected to confirm fears that climate change, particularly flooding, will affect tens of millions of people, mostly in Asia.

Now, a new generation of Noahs is proposing that floating cities could provide the solution to rising sea levels, overpopulation and food shortages. Water-borne city states are enjoying political momentum and attracting serious investment; from modest floating villages in London, to huge sea-bound structures which float on the ocean’s surface and can also submerge in the event of rough seas.

Far from being sci-fi fantasy, the infrastructure behind these proposals is well-trodden territory for engineers. The platforms and mooring systems used in these designs are similar to those for large ships or oil rigs, and some airports already float on water. 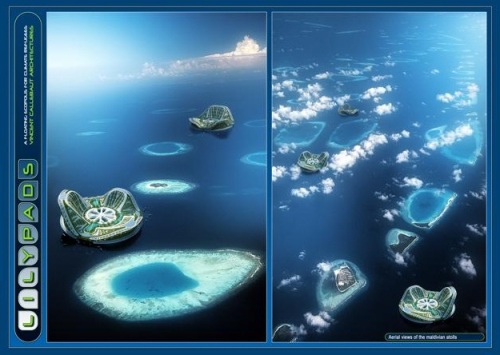 Other practicalities, such as using wind power for energy, or relying on the sea for food, have also been considered. The Seasteading Institute founded by the grandson of Milton Friedman goes even further. It proposes a series of connected oceanic utopias which would test new ideas for government. The floating villages could even be disconnected in the event of a political dispute.

The idea of entire populations living on the water is not altogether new, although the scale of these visionary vessels is. Freedom Ship – a mile-long floating city for 40,000 residents designed by a Florida-based company – may be close to securing its $10bn funding. If it gets the go ahead, it will include schools, hospitals and even a university.

Are floating cities realistic or just maritime madness? Some say the ideas are too expensive and will mean little to those in impoverished countries like Bangladesh, where affordable solutions are needed fast. It is wrong for us to simply set sail, or flee into space after making a mess of life on land. Not enough serious thought has been given to how these watery worlds would be governed, or which laws would be obeyed, and terrorism and piracy have also been cited as major concerns.

But the fact that these ingenious designs even exist is a step forward for humanity, even if much work is still to be done on the technical, social and political aspects. Seven-tenths of the planet’s surface is covered in water, and rather than fearing the sea, we could harness it to protect and expand human life on Earth. It offers great and exciting opportunities as well as challenges.

You May Like :
1. AMAZING PHOTOS FROM HAJJ 1953
2. Objection : The Stonehenge was built in 1954 ?
3. 11 Amazing Photos : How Physics, explain its ?
4. Christopher Columbus was great, but the discovery of the Americas belongs to Mansa Abu Bakr of Mali ?